«The church was still white in the light blue, perched like a seagull on the top of the highest cliff that went down to the sea». A faint image. A soft brush stroke of a fantastic story about the past. But, no. The story we are going to tell belongs to the past, but it is not the fruit of imagination. These evocative words told by Verga, based on the short story “Day of the Dead”, refer to a building which has been consumed by the urban development in Catania during the XIX century. It is the Church of Blessed Savior, at one time located on a cliff, beyond the citizen wall, near the historic neighborhood called “Civita”. The story, popular tales, engravings of different artists have contributed to increase many legends about this holy building. But, what does still remain today of the church that guarded city coasts long time ago? 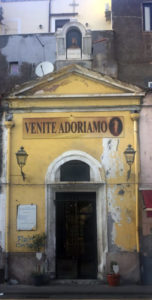 No doubt the neighborhood of “Civita” is one of the richest of history among those that dots the urban fabric of the ʻetneoʼ county seat. It seems that establishment dates back to the Arab domain of the city in the X century AD, but its whole development has been realized parallel to building of the sixteenth-century walls of Carlo V. So, the “Civita” became, for what its name suggests, a defensive wall of the city. Neighborhood of princes and fishermen, it changed its own characteristics partially after the awful lava flow in 1669 and after the earthquake in 1693. Nevertheless, what changed its aspect drastically was the human hand. During the years following the Unity of Italy, the construction process of rail axis begun. Quite obviously, this concerned the largely demolition of street furniture, including city walls and the Church of Blessed Savior, that was built in the early harbor of the city.

Walking to ʻvia Dusmetʼ and skirting the ʻarchi della marinaʼ (arches of seascape), it is possible to rediscover what remains of that small church. By now there is no trace of the original building. However, some decor, which tradition collocates within the holy building in ancient times, persist. Not everyone knows, in­ fact, that during the second half of XIX century a chapel has been built in close proximity of the early church. The architectonic complex, which has gaunt appearances, now houses a wooden bust figuring Jesus Christ the Redeemer of the World, realized in 1532 according to tradition, that in ancient times was preserved in the Church of Blessed Savior. The chapel, dedicated to Saint A­ga­ta alla Ma­ri­na or, in others’ opinion, to Saint Maria in Por­to­sal­vo, it is not a cult set particularly frequented. Pro­ba­bly for its difficult collocation. It lost its mysterious aura which characterized the disappeared small church, described by Giovanni Verga in a masterful way. Consider that the writer from Catania imagined there was a cave under it that functioned as access for the land of the Dead.

Translated to English by Daniela Marsala

The thousand variants of the “cùddura”

Genesis of a masterpiece: how Picasso’s Guernica was inspired by a Sicilian painting