The British archaeologist, and anthropology professor at Stanford, is visiting the mountainside provincial capital to write a volume about the 25th anniversary of his excavation project in Çata­lhöyük, Turkey. We gave him a tour of the city’s sights and eats.

It’s 11.30 am and the sun is already quite high over piazza Duomo. Tourists chase after shade, while our fellow citizens hastily cross the streets, oblivious to the beauty all round them. We meet at the cathedral, Hodder’s straw hat makes him stand out among the crowd. It’s not quite the same as Indiana Jones’ but it catches the eye just as well. Sadly, this is not a pleasure trip for professor Hodder: he is in Catania to write a book for the Scuo­la Su­pe­rio­re di Ca­ta­nia about the 25th anniversary of the excavation, which he leads, at the UNESCO world heritage site of Çata­lhöyük, a 9000 years old settlement in Turkey. Hopefully, this day we’ll spend together visiting the city will provide a welcome moment of respite from his work.

«Bellini? He is not very well-known in England. I quite like opera but I have never heard anything by him»

The catherdral soars above the square and the nearby Roman baths, while professor Hodder scours his surroundings taking in as much of our history as possible. Inside the Duomo, Cardinal Dusmet’s remains seem to pique his interest. The blackened bones of his skull are hidden beneath an iron mask, while his hands are in plain view, for everyone to worship as relics. The small chamber, which holds the patron saint Agatha, doesn’t go unnoticed either, just as her jewelled crown, once owned by Richard The Lionheart. Although, in front of Vincenzo Bellini’s tomb, Hodder admits: «He’s not very well-known in England. I quite like opera but I have never heard anything by him». Neither he has ever had a Norma (the typical pasta dish with tomato souce, fried eggplant and ricotta cheese), as he confessed to me later: matter to solve as soon as possible. 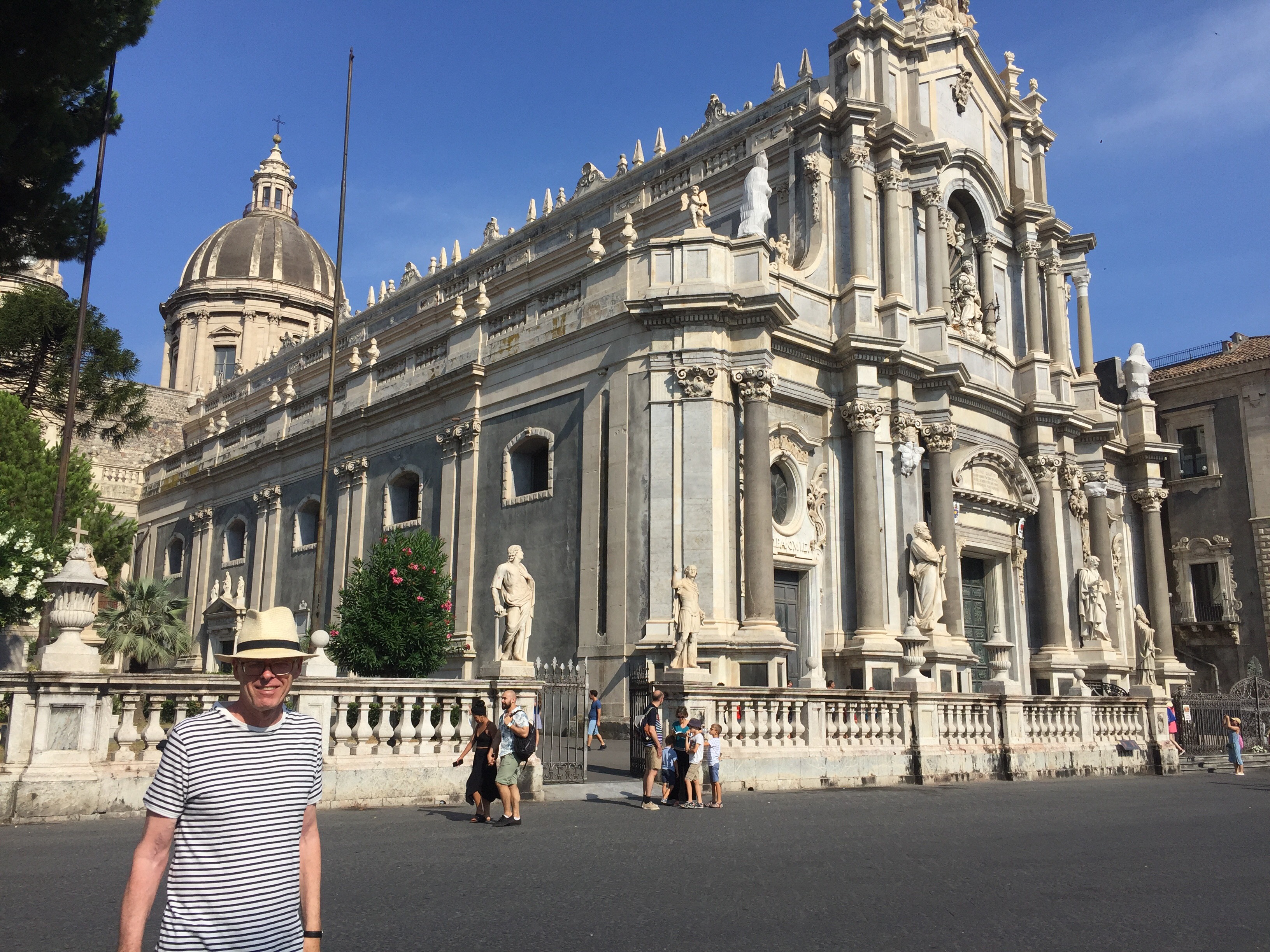 As we step foot back into the square we head immediately towards the fish market, noisy and colourful. First stop: a “chiosco”, a drink stand, where the professor tastes a staple beverage, made with sparkling water, salt and lemon juice, which he seems to like. As we walk, he expresses his confusion about “telline” (a small shellfish): he doesn’t get how we are able to eat them: «Just like clams» I try to explain. «But they are too small!» he replies. All of a sudden he stops, stares at a building for a few moments and says: «This city reminds me very much of Genoa. I’ve been there a few years ago. It’s a hidden jewel, just like Catania. There were very few visitors and it was like I was discovering things for the very first time. I’m getting the same feeling right now. It’s quite the spectacle to walk these streets and alleys full of such rich history. Remarkable indeed». As we approach the Terme dell’indirizzo, the Roman baths, we notice that the gate is shut. We’re left outside, looking in, and can’t help but think what a shame it is to have such treasures locked away.

Not far from the baths, an abandoned and crumbling building catches his eye: «Something like this would never happen in England. Nobody would allow a building in such conditions not to be taken down. It’s not that I don’t like it, it’s just a matter of culture. Yours and mine are clearly very different». So, here we are, contemplating the value of acceptance, thinking about how Sicilians have always embraced other cultures, forging their identity through countless contaminations: «It’s fascinating – according to Hodder – how strong the sheer will of the people of Catania to move forward is. It shows well in their resilience, in their ability to endure multiple invasions by such diverse cultures and civilizations: Greeks, Romans, Arabs, Bizantines, Northmen and many more. This must have taught you how to deal with change in a very peculiar way, to accept it. It’s probably why the people are so welcoming and tolerant here. This determination is also apparent when one considers how many times the city has been destroyed by natural disasters and rebuilt shortly after». 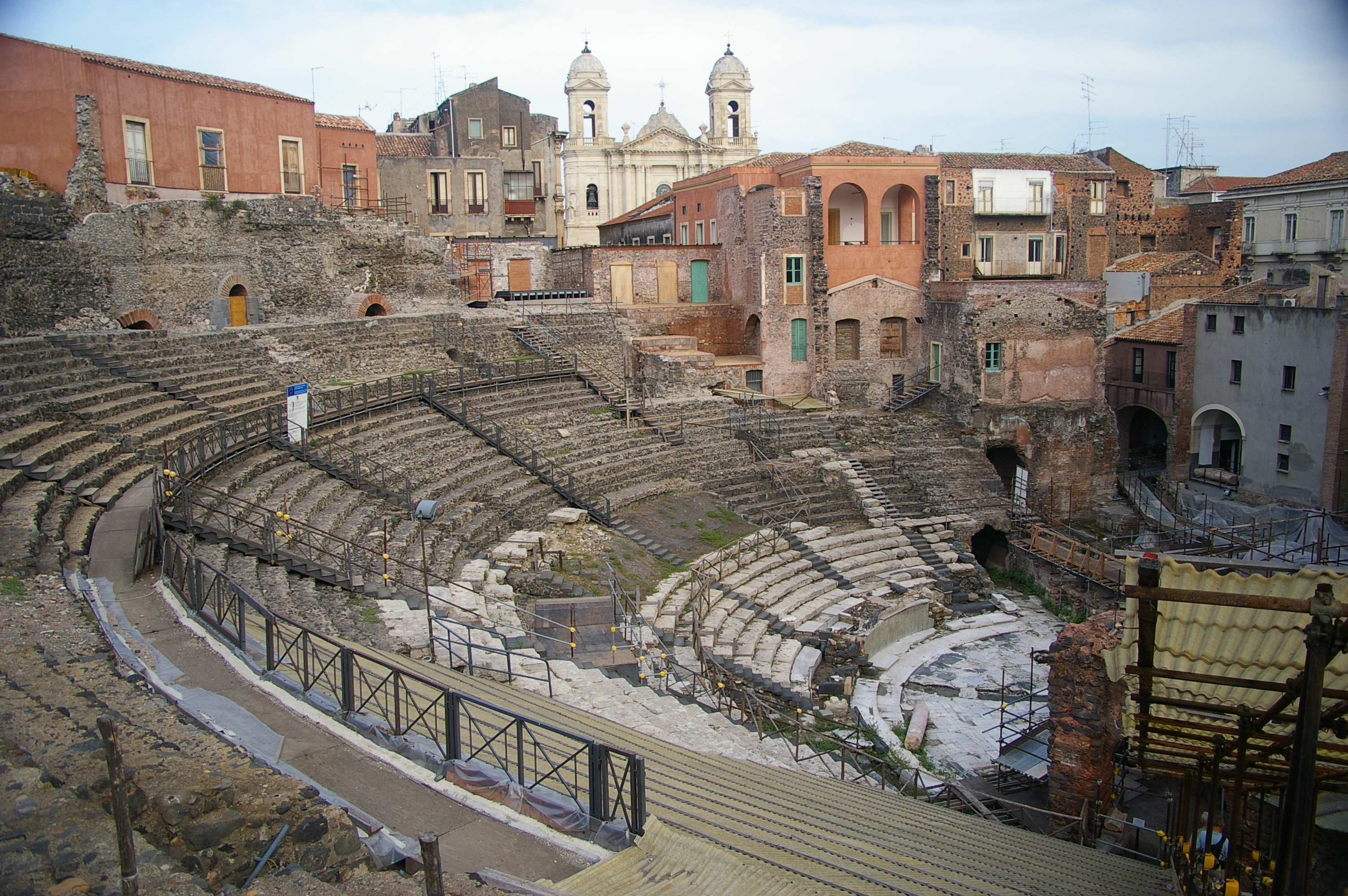 We leave the market behind us and I lead Mr. Hodder to the Greek-roman theatre: «Good morning, my guest is an archaeologist, do we have to pay for the ticket?» «Not if he has an ID to prove it». The professor doesn’t have any identification on him, so we offer a copy of the newspaper “La Sicilia”, with his picture on it, as proof.  «I’m sorry but we can’t accept that» we are told in response. Hodder doesn’t seem in the mood to argue, so he happily pays up. We explore the ruins at a brisk pace as both of us are getting quite peckish at this point, in the meantime he doesn’t miss the chance to ask me a couple of questions about the lava and its role in the destruction of the city.

We turn around and head back into the market where a fish meal awaits us.  He tells me about his favourite film: Kaos by the Taviani brothers. Based upon Luigi Pirandello’s short stories, it marked the very last appearance of Ciccio and Franco as co-stars on the big screen. He’s eager to learn about the origin of the name Kaos: «I’m born from Chaos – I say, quoting the Nobel prize Pirandello – for I was born in a field of ours, near an intricate grove called Càvusu by the people of Girgenti (Agrigento), who made the ancient Greek word “Kaos” their own». 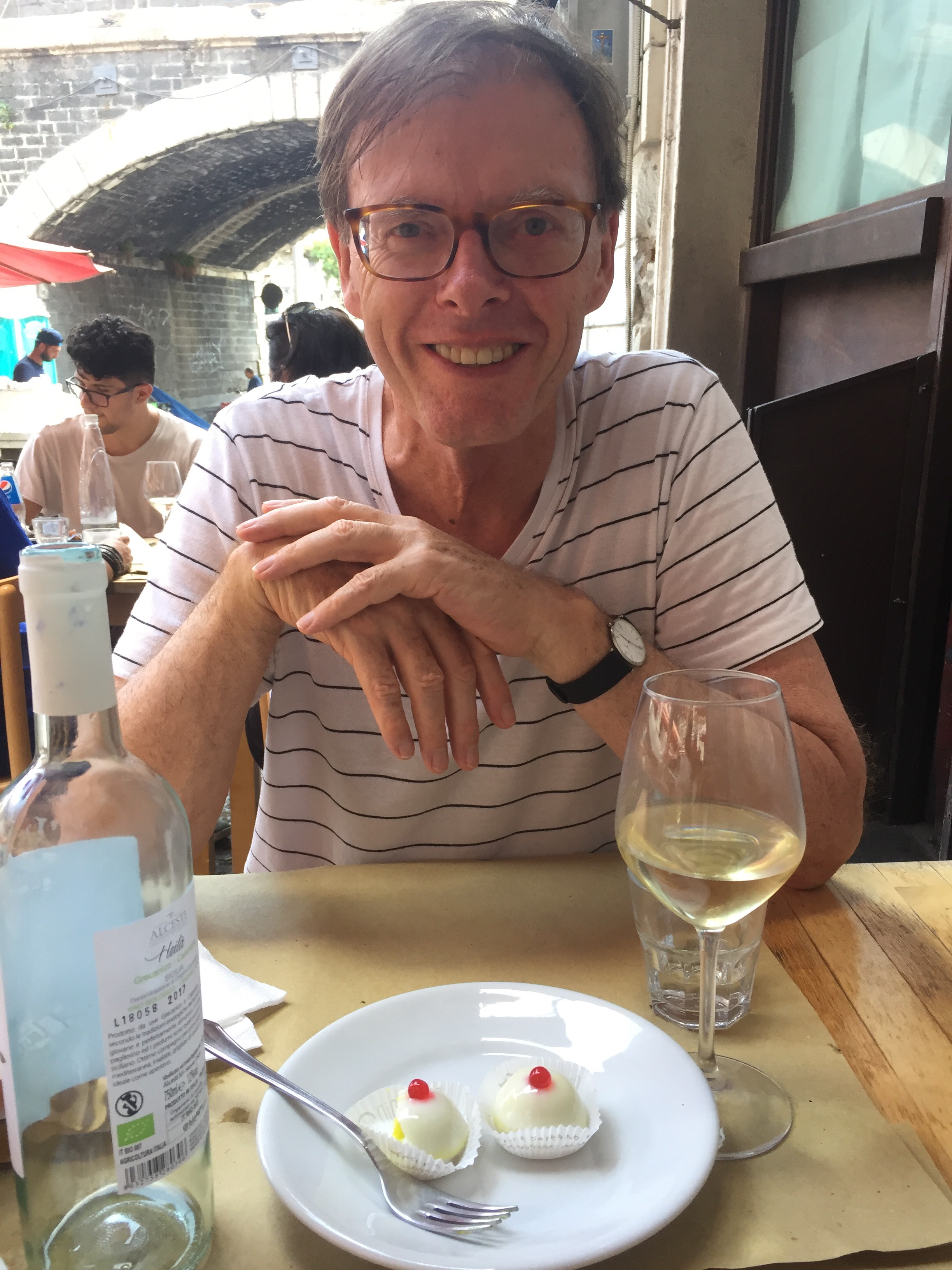 As soon as we are seated comfortably at our table, a waiter approaches to take our order. «Telline!» says Hodder enthusiastically. We are informed that they are not available, so we end up getting several starters and, of course, a Norma. Over the course of the meal he asks about Agatha, Catania’s patron saint. A smile appears on his face when I tell him about a very peculiar dessert of ours, “Saint Agatha’s breasts” and the tradition which suggests to eat them in pairs. Our topic shifts towards Sicilian women, he says: «They wear a lot of make-up here, as if they want to show their femininity off. In California, the vast majority of women are feminists: they refuse to wear any to let everyone know it. They believe women and men ought to have the same rights and so they’d rather hide their femininity away».

«I had visited Catania before but never really understood it. This extraordinary city has totally charmed me and I’d really like to learn more about history has created a way of living that’s unique to this place»

Suddenly, he pulls out his phone and I notice it’s quite an old one: «I’m not particularly fond of technology, even if it’s useful to some degree. – he explains – I have many brilliant students, but they are so detached from real life. It’s troubling». We are still chatting when a steaming bowl of Norma makes its way onto our table. While we help ourselves to the delicious pile of carbs in front of us, he asks about Mafia, we crack a few jokes about The Godfather and he learns that Corleone is an actual town. We finish the meal with the “Breasts”, which he finds too sweet. We may have finally found something Mr. Hodder doesn’t like about Sicily. Just as we are saying goodbye, he confesses: «I had visited Catania before but never really understood it. This extraordinary city has totally charmed me. It’s like history has created a way of living that’s unique to this place. This is something I’d really like to learn more about and truly understand».

Between madness and art: “Filippu di li testi” and the Enchanted Castle in Sciacca

The challenge of accessible tourism in Sicily