Under the plaster of a seventeenth-century building in Ballarò, lies a room with the following Arabic inscription: «Whatever God wants, it will happen. Whatever He doesn’t, will not»

Most of us must have certainly renovated their home at least once in their life. Let’s imagine refurbishing a room in your apartment and finding hieroglyphs or other strange symbols, buried under layers of plaster settled over the years. If you believe such things only happen in the movies, you would be wrong, as Sicily is always surprising from this point of view. Considering the mix of cultures that have marked the territory over the centuries, it is normal to find traces of a world that no longer exists, even in the most unthinkable places and sometimes hidden in plain sight. The «Chamber of Wonders» is one of the most extraordinary of these examples.

IN THE HEART OF BALLARÒ. «Palermo is defined by its contradictions. With their old pain and new torments, the stones of the phalanxes are made of blood, but also of honest people’s sweat». Leonardo Sciascia defined the city in a way that, after all, still sounds appropriate: Palermo can actually be described as a city of contradictions, crossed by completely different peoples, who transformed his territory and, above all, left an indelible mark there. This turns out to be crystal clear even now that the city really is at the forefront: the capital of Sicily is chaotic, but also extremely fascinating and mysterious. It should therefore come as no surprise that near Ballarò market (one of the best known in Palermo, set in Via Porta di Castro 239), the unaware owners of an apartment located in a seventeenth-century building found themselves with a real treasure on their hands after a renovation: a room entirely in blue, with decorations and silver inscriptions in Arabic. 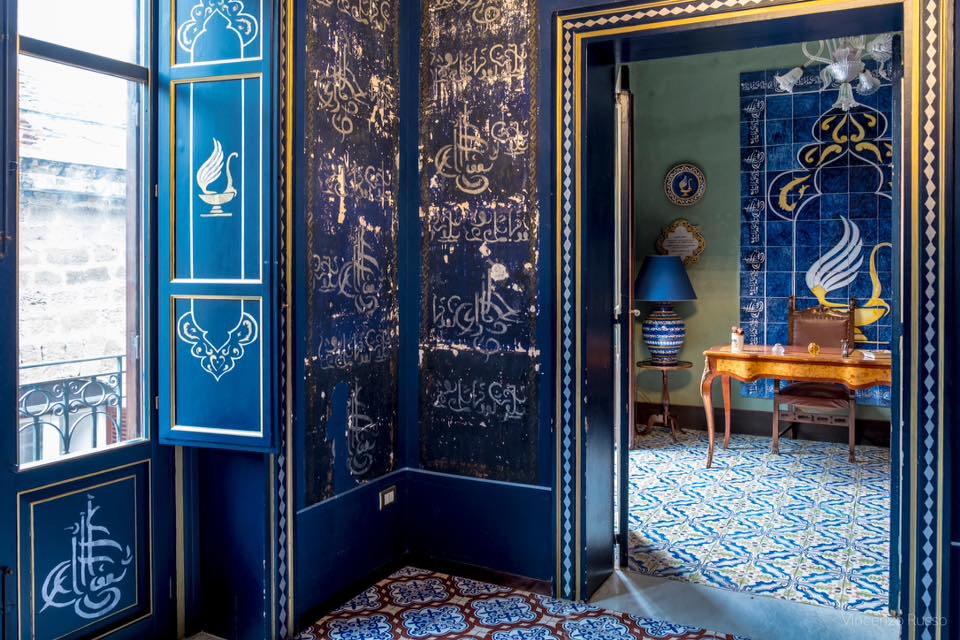 ART AND SPIRITUALITY. « Whatever God wants, it will happen. Whatever He doesn’t, will not ». This inscription is repeated several times in the «Chamber of Wonders», almost like a mantra. The phrase is taken from the maxims attributed to the prophet Muhammad and evokes a high spiritual dimension, symbolizing the desire to invoke a sort of reconciliation with ourselves and with the world. This discovery could make us think of a truly ancient place, since Sicily had long been under Arab rule, between the IX and XI century AD, when Palermo was chosen as their favourite centre of interest. About that, it is no coincidence that many of the architectural styles in the city recall those typical of Islamic countries. Yet, some studies showed that the decorations of «Chamber of Wonders» date back to the XIX century.

THE MYSTERIES OF THE «BLUE ROOM». Experts coming even from Bonn tried to unveil the mysteries of the «Chamber of Wonders» and, after more than a year of research, came to the conclusion that the inscriptions are not properly in Arabic, as the wordings were probably composed from a local artisan, who copied them making some serious mistakes. Unfortunately, it is not clear to what purpose the room was built, so that there are still many doubts in this regard: could it be a place that has to do with masonry, or with some esoteric practice, or is it just a room dedicated to Islamic prayers? In fact, the latter hypothesis would be justified by the positioning of the place towards the Mecca. Whatever was the goal of those who created it, this little pearl in Ballarò certainly represents further proof of the rich artistic and cultural heritage of Sicily.

Contemporary art at Palazzo Biscari: two exhibitions in Catania propose a journey between illusion and reality

The other face of beauty

The history of the ‘giara’, the Sicilian vase you can use in any occasion

Sicilians on Erasmus: leaving your comfort zone and coming back like a brand-new person

What does Sicilian flag really symbolize?

The cathedral by the sea set of the murders in ΄Montalbano΄

“Sarde a beccafico”: Sicilian ingenuity in a dish

Rick Steves: “In Sicily, food is a religion”

Getting a taste of Sicily: the best virtual tours around