This slumbering city is often drowned by big clunky architectures that don’t make her beauty justice. Instead some others speak volumes about the city’s long history and are truly worth a visit.

Let’s for just a minute imagine Catania as is used to be: carriages instead of cars, the music from Faust fades away while Verga and De Roberto enjoy the atmosphere of the musical platformin Bellini Park, the Frigeri sisters give the last touches to a dress before closing their dressmaking shop and doctor Clementi is lost in his paperwork, his patients waiting behind his clinic’s large windows.

Here are five of the most beautiful buildings that still stand as a hallmark of a city often forgotten: 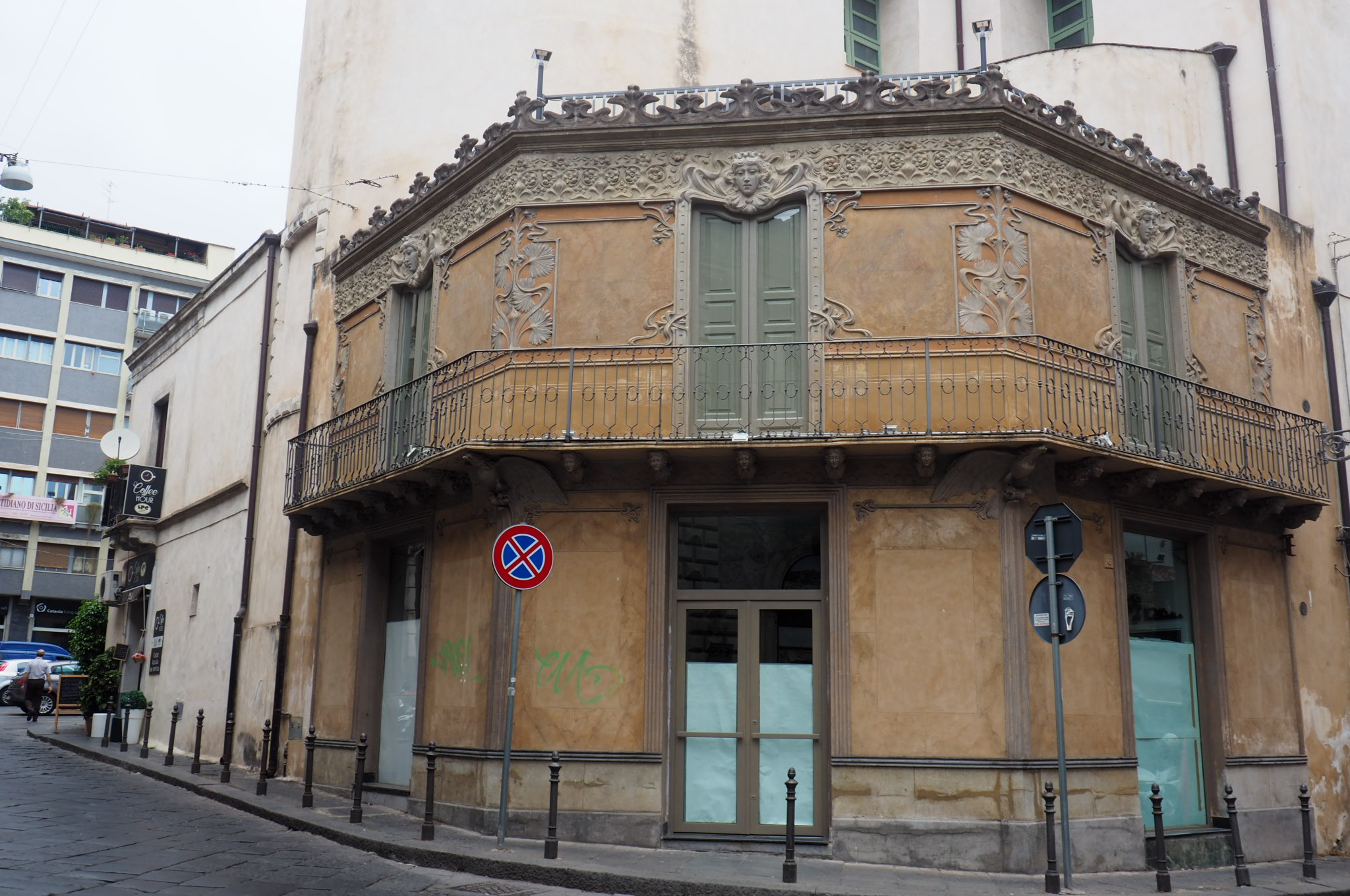 FRIGERI SHOP. A dressmaking shop built between 1908 and 1909 from the sheer determination of its owner, Cesira Frigeri. Born in 1869 in Fiorano, soon moved with her family to Catania where she begins to work on her dream: to run, along with her sisters, her own shop. The tricks of the trade firmly in their hands thanks to their father, it is just a matter of time until her husband, Orazio Buccheri, finds a suitable location near the church Collegiata, situated between the homonymous street and via Manzoni. Architect Tommaso Malerba is chosen to design the building. He has already made a name for himself with the farming exposition building but outdoes himself on this project. Pressed against the church’s apse, the building has a one of a kind layout with a kaleidoscope of concave and convex surfaces. The marble clad front shines among the towering nearby buildings.

SANGIORGI THEATRE. Opened on July 7th 1900 “il Sangiorgi”, as it is called to this day, is a Liberty style theatre born from the desire of Mario Sangiorgi. A plumber by trade, Sangiorgi comes back from Paris with the burning desire to give his city its own Belle Époque. He builds, on what once was via Lincoln, an open air theatre complemented with a café-concert, a restaurant, a hotel and even a skate park. Personalities like Eleonora Duse and Totò are among those who hand out at Sangiorgi. This is where in 1913 the actress Paola Pezzaglia, forced to play a male role, still delights the public, oblivious to the change of plans. The front of the building, with its multitude of influences, exemplifies the style of its designer, Giannetto Malespini. The tripartite vertical partition is echoed in the openings. Staples of the Liberty style, like floral ornaments, are paired with columns reminiscent of the renaissance and twisted ones that call back to baroque and Arabic styles. 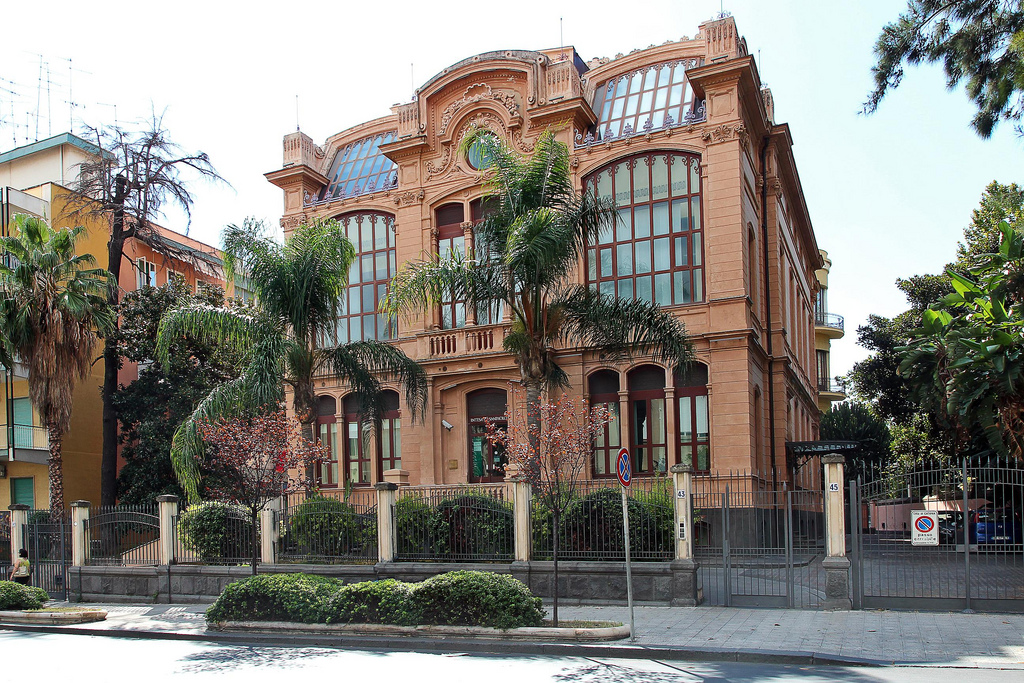 CLEMENTI CLINIC. Inaugurated in 1904 and strongly desired by Gesualdo Clementi, dean of the University of Catania and talented surgeon, the building, located in Via­le Re­gi­na Mar­ghe­ri­ta, used to host a hospital. Architect Carlo Sada, through a clean style, managed to turn the architectural vocabulary into an ornament: the sloping windows on the first floor, for example, allowed more light through for the operations, blessing at the same time Catania with a unique look. The ventilation system was very ahead of its time, with a steam dryer for sterilization purposes, as was the clinic’s lab and its gutters, hidden inside the walls. Today the building is the location of Intesa San Paolo bank’s offices. 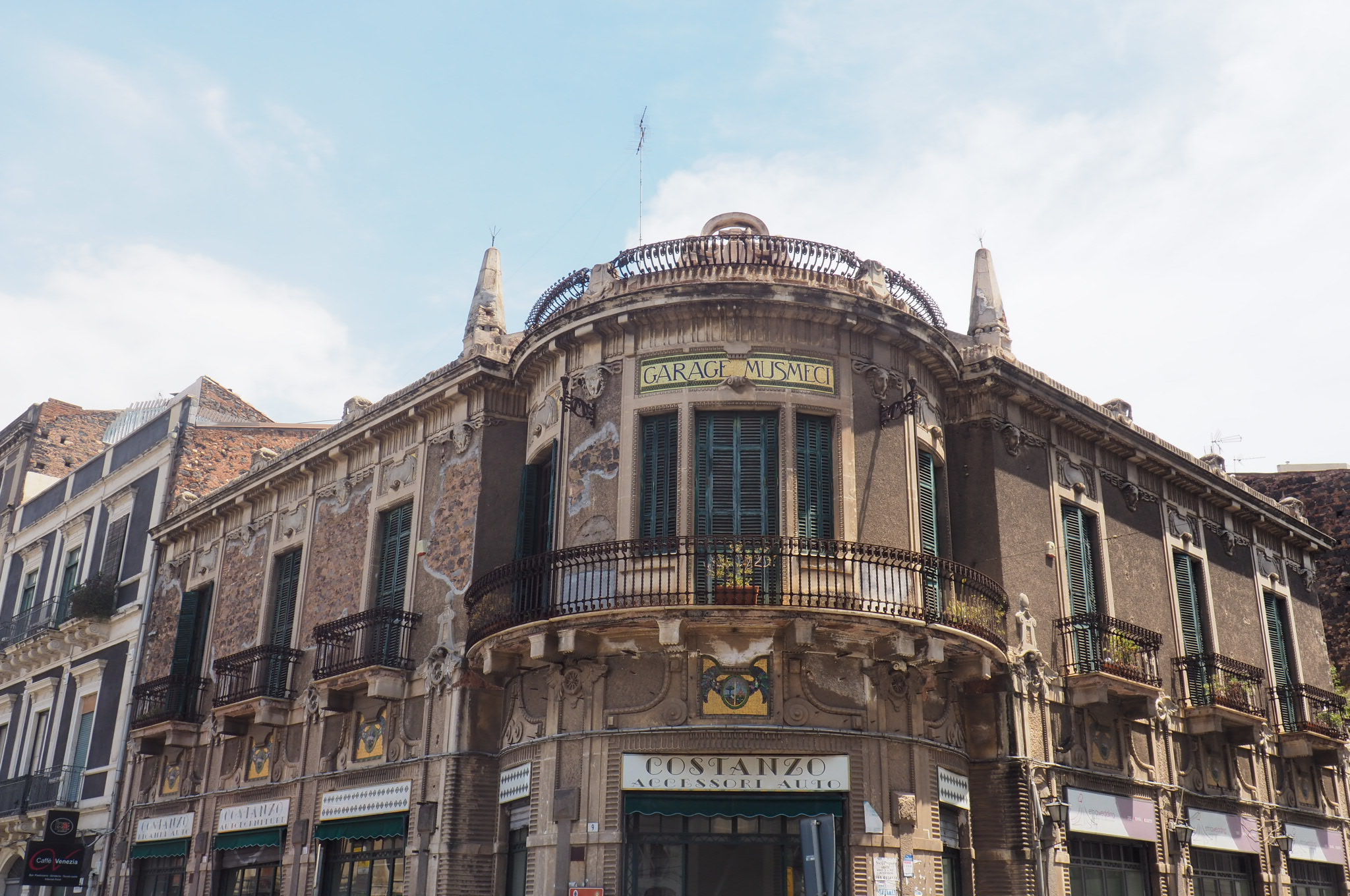 MUSUMECI GARAGE. Located in Piazza Bovio, it is to this day a shining example of the talent of its designer Francesco Fichera. So much so that in 1931 it was among the buildings targeted by the fierce criticism expressed by Pietro Maria Bardi and the architects of MIAR (Movement for Italian Rational Architecture) through a famous exposition in Rome. Built to host a car dealership on the ground floor and Baron Musumeci’s residence, it is in a way still true to its original purpose as it is now a car parts shop. Its front in particularly remarkable with its curves and golden mosaics shimmering under the sunlight. 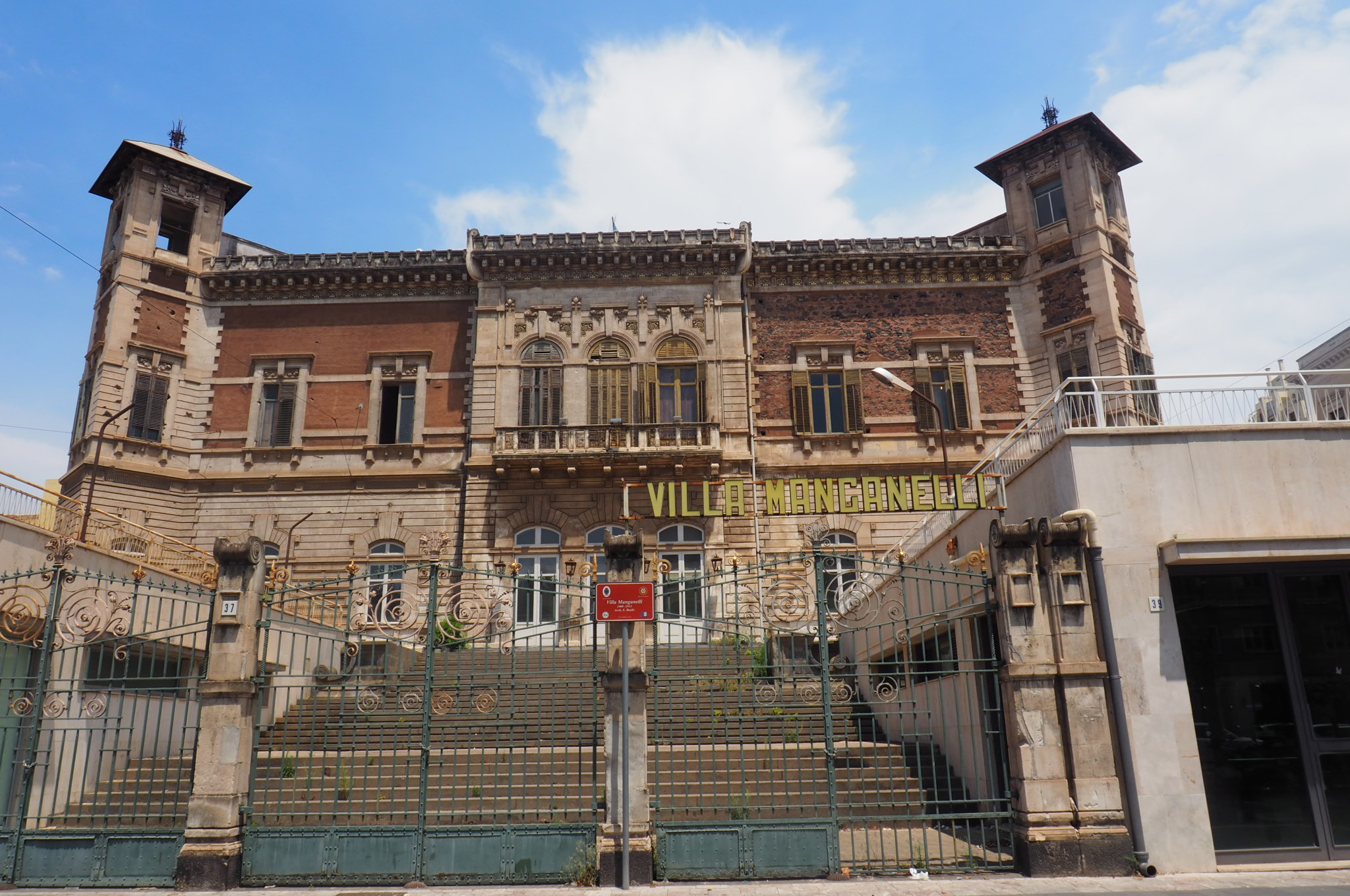 MANGANELLI MANSION. One of the most iconic structures of Corso Italia, was built by Ernesto Basile, a prominent figure of Italian Liberty. Some of its features like towers, ashlars and floral ornaments are reminiscent of the eclectic style. A beautiful building with a troubled history: meant as a wedding gift by Principe Magnanelli for his third wife, who for some odd coincidence shared her first name with the other two, was never actually a home to the couple. Sold in 1947 to Mirone and Palumbo families, was split to accommodate the two ones. In 1975 it begun to house the city theatre “Piccadilli” which was shut down in 1981 after a fire destroyed the first floor. Chosen by Visconti as a location for “The Leopard”, after years of restoration it now holds private gatherings. 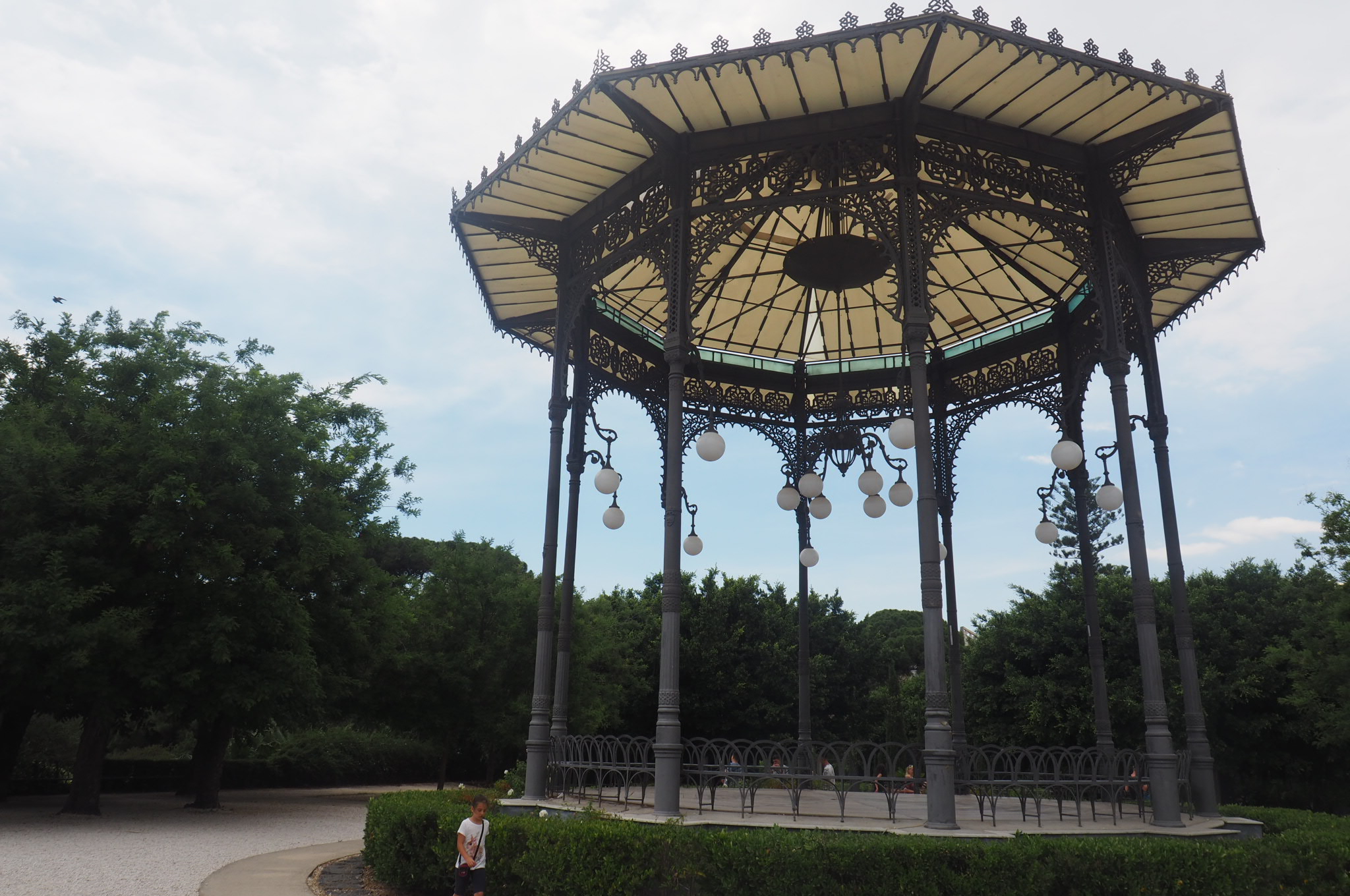 THE MUSICAL PLATFORM. Located inside Giardini Bellini (the city park), it was here that musicians and singers alike would delight the city’s nightlife. Even Verga and De Roberto fondly remember to have attended one of these concerts. The cast iron structure, built between 1877 and 1880, symbolized the achievements of modern engineering and was promptly rebuilt after its destruction during WWII. Until 2001 on a small hill opposite to the platform stood the “Palazzina cinese”, a small wooden structure built in an eastern style, which hosted a library. An arson, whose responsible are yet to be identified, completely destroyed it.

Aci and Galatea: a love flowing towards the sea

Catania: Piazza Carlo Alberto between the “Fera o’ luni” and the oldest catacombs in town

Serving communities and responsibility: the future of local news

“Isola”,
the hub
where old
and new meet